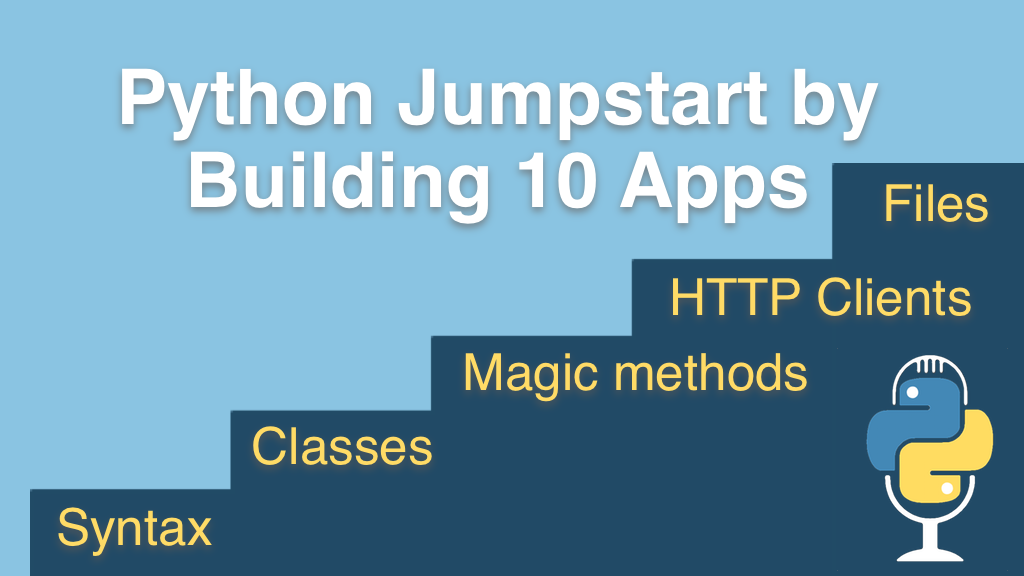 Learn more about this course
Login or purchase this course to watch this video and the rest of the course contents.
0:00 Let's review what you've learned in each one of these apps. When I first introduced the apps I told you what you are going to learn

0:07 but you had never seen it so you know, it probably didn't really resonate the way it will now.

0:12 So let's go through and just kind of review really quickly and if you had to reinforce one of these concepts,

0:16 just jump back to either the concept video from that app or the code, or play around with it some more.

0:26 remember, the goal was really to test your Python environment get your editor set up,

0:31 things like that, not really to prove that you can write print hello world, that's silly, right. So, we sort of introduced PyCharm here,

0:38 we talked about variables, strings, and accepting user input and this was really sort of getting our feet wet, getting started.

0:45 Next app was, what I kind of considered our first real app, that's Guess That Number Game, and remember,

0:51 the computer randomly select a number between 0 and 100 and then it would tell the user hey, you are too high, too low, as it took in the guesses.

0:57 So in order to do that, we had to understand boolean conditions, we had if, else, elif statement, while loops

1:04 and when we start talking about these concepts like if else statements and while loops we have to talk about the shape of a Python program

1:12 and here we learned about the white space and indentation and how the smart editors help with that,

1:17 we also talked about string formatting with the curly braces to sort of generate strings in a much nicer and more flexible way,

1:23 and we got the very basics of functions go in there as well. App 3, When Is My Birthday this one was all about dates, times and time spans,

1:31 now these can be tricky in Python so I made this special app just to help you become comfortable with those

1:37 and sort of reinforce what we learned in the first two apps. App number 4 was our Journal or a daily diary and this was pretty big,

1:45 we covered a lot of stuff, this was our first sort of major app I would say.

1:49 And, because it was a bigger app we actually broke our code into multiple files, we had our journal, module, and we had our main program.py

1:57 and we had those work together, we did a lot of file I/O and to facilitate that we did path management and in OS independent way using you know,

2:06 not surprising the OS.path; we used for in loops and iterators, obviously playing a key role in the for in loops, because we had these different files,

2:14 we might want to reuse the methods and features of one of those modules, and if we have been just calling main,

2:22 or just writing our code directly, like write in line there, we wouldn't be able to import those, so we talked about the dunder name convention,

2:29 to differentiate between when your program itself is being run and when your script is being reused.

2:36 Also we talked about documenting your own code with docstrings. App number 5, this was our weather forecast app and we went out to weather underground

2:44 and we grabbed the HTML and we did that using a technique called screen scraping

2:48 by making an http request, using the request package pulling that down, taking the HTML, send it off to the BeautifulSoup package

2:55 and then writing css selectors against that in memory to actually pull out the data we want.

3:01 In order to get Requests and BeautifulSoup, which are external packages,

3:05 we used pip and we could further isolate our particular environment in our application using virtual environments.

3:14 Along the way I also got to introduce you to a very Pythonic concept called slicing.

3:17 App 6, I hope this one made you laugh, this was the Lol Cat Factory, And this was all about consuming services and working with binary data,

3:26 so recall, we went out to our lol cat service, we downloaded a bunch of binary images, and we saved them to the file system

3:33 and then we used Python to subprocess capability to launch the finder or folder browser explorer depending on your os,

3:41 we'd launch that up to actually show the UI since we are not diving into things like PyQt and so on.

3:48 App number 7 was our Dungeon and Dragons Style Wizard Game, this was one of my favorites and this one is about

3:53 a very core concept in modern programming and Python classes, inheritance, things like that. So we talked about how you create classes,

4:02 and model your data structures with classes, and inheritance allows us to sort of separate that into layers,

4:07 so it's more reusable, more manageable Python has magic methods, sometimes are referred to as dunder methods, like __init__(), __str__(),

4:16 for overwriting behaviors of our classes, our objects for example we can write the __init__()

4:22 to take control over the creation and initialization of our objects, and speaking of initialization, we saw when we are doing inheritance

4:29 that you need to be careful about chaining these together in the correct order so the whole hierarchy get setup correctly.

4:36 Typically, this is where you define your fields and these __init__() methods and when we are using our objects you don't have static typing in Python,

4:45 instead we use something called duck typing to achieve polymorphism.

4:48 In application 8, we built a file searcher app and we got to feed a ton of data to it,

4:54 remember we had our 2.27GB of text what we were searching with this thing, so in order to make that much more performant and efficient

5:08 and because we were trying to process a hierarchy, a tree of data, the file structure, we used recursion which models that scenario very well.

5:18 In app 9, we got hold of that comma separated value data on the Sacramento real estate market in 2008 I believe it was.

5:28 And we loaded that up, we did all sorts of interesting processing on it, we saw that at the heart of Python are dictionaries,

5:35 and dictionaries of course played a key role in our comma separated value processing as well;

5:40 we wanted to sort the data that we got back out of that file and we did that by passing a method

5:45 we saw that methods were first class objects in Python, and when you want to write really small concise ones, it's much better to use

5:53 a lambda method or lambda expression rather than creating a method somewhere else and just so that you can pass the name in where you are.

6:00 We talked about the csv file format and how Python has built in support for processing that, we also saw that we can run into a situation

6:07 where Python 2 and Python 3 behave differently, remember we had the statistics module that's in Python 3.3 and above

6:14 but not in Python 2 so we wrote special code to sort of do a polyfil or fill in that missing piece for Python 2

6:21 and the consumers further down in our app didn't have to worry about whether there was the statistics module

6:28 we introduced a less efficient but sufficient one for them to use. we also saw that many of those situations that are solved with loops and lists,

6:35 so looping over a bunch of data, doing some tests, things like that, can be solved much more concisely with list comprehensions.

6:44 And while solving problems with lists is great, in app 8 we saw the performance implications

6:49 that you can run into if you are processing a lot of data in a pipeline. So, in app 8 we used generator methods,

6:56 there is a similar concept in this comprehension style called generator expressions

7:01 so we use those generator expressions to create efficient data pipelines. The last app we built was app number 10, The Movie Search App.

7:10 This went out to the open movie database api and it pulled back data. And that was interesting, we were processing json and things like that,

7:17 but the key focus of this app was to build reliable code. When you have a network based code chances that the network is down are pretty good,

7:28 especially if you are running on a client machine like a laptop where it could be out of wi-fi range or whatever.

7:33 So we need to be able to handle those errors we introduced the try except block to do that,we also saw that you can use multiple except blocks

7:40 to handle errors by type, remember, put them both specific one first the most general one last,

7:45 we also talked about validating arguments by raising errors; we had some kind of argument pass doing init method for a class

7:53 the init method doesn't have a return value that you can pass back and say false or none or something like this,

7:59 but we still want to validate the arguments coming in and so we saw that we could raise an exception when invalid data was passed

8:06 and then the object would never even be created unless it started out in a valid state.